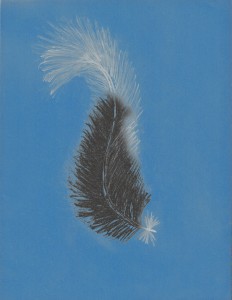 What is the meaning behind the feather? It is a message from my beloved dog, Dru. Before Dru died, I asked him to let me know when he reached heaven. I wanted to be sure he was safe and happy. Every time I have to say goodbye to one of my animals, I always ask them to send me a sign. Dru was no different. From the time he passed on, I waited intently for something. Each of my animals’ signs has always been different. One time it was a clap of thunder on a sunny day. Another time it was a bullfrog that sat at my front door for two days. I never know what it will be or when, but I do know that I can always count on them to come through on their promise.

For Dru, it was the feather. It took three weeks after his passing. I was sitting outside, in a place I always sit, reading a sympathy card from someone who knew him well. In fact, his dog had passed a few weeks before, and while Dru was being put down, I asked his dog (Moses) to meet Dru when he crossed over. As I was reading his kind words, a tiny feather drifted into my lap. I had never seen a feather quite like it before; it was identical to the markings on Dru’s tail. I stared at it for a few minutes in disbelief because there was no bird in sight. I also wondered what kind of bird it could belong to because it was so tiny. Yet, as soon as I picked it up and examined it more closely, I knew it was my message from Dru. He arrived to his final destination and I knew he was safe.

I framed the feather so that I can cherish it forever. I wrote the poem and entire Rescue Me series because of the impact Dru had on my life. It was through all of his adversity that I learned to become a better and more patient person. His story will be told in the second book of the series “A Pup’s tale”. The feather is a symbol of Dru and the love I will always hold in my heart. – Jaimi Ilama